Over the last 100 years of aviation, many different engines have been used to propel aircraft and many of them you’ll be aware of. There are the radial/rotary engines of old – those beautiful power-plants with the cylinders in a perfect circle, often protruding from the front of a biplane. The powerful engines of the WW2 spitfires and other aircraft again used cylinders but often configured in a line or V-pattern. Obviously, the jet-age took us to new heights with different technology which replaced the propeller, and the cylinder, altogether. 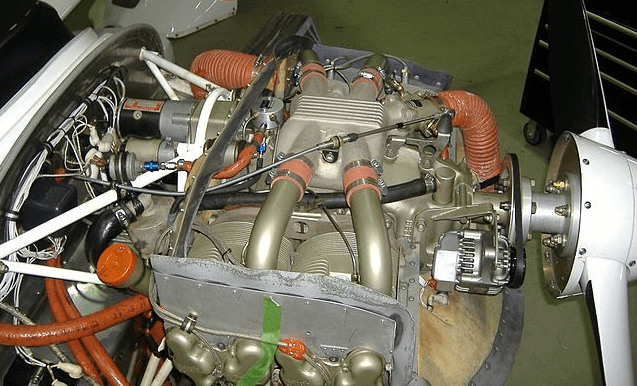 General aviation has traditionally favoured one type of engine and any VW Beetle or Porsche 911 fan will be very familiar with it. It is the horizontally-opposed (“boxer”), air-cooled, internal combustion engine. Whether having six-cylinders or four, this type of engine has proved incredibly reliable, powerful and versatile and can be seen in GA aircraft spanning the last 60+ years.

These engines are special made for GA by manufacturers dedicated to that task. There are two makes which dominate the market, namely Lycoming and Continental, but other makes have come and gone – or are here today.

The other engine which is becoming much more popular, is the water-cooled piston engine, usually in lower power ranges. One of the best know here is the Rotax engine, owned by the mighty (and Canadian) Bombardier.

There are several manufacturers making these smaller engines including Jabiru, Polini, Hirth and D-Motor. These motors are sometimes geared-down for the propeller, meaning the engine RPM’s are faster than the speed the prop turns.

Which engine a particular model has, the benefits and comparisons is the stuff of many a pilot conversation, thus not possible here. The main point is that GA engines are made to be extremely reliable, being that in-air reliability is the most important factor for pilot, machine and – well – everyone else.

There are many different routes to general aviation. Many owners choose the certified aircraft route, whereby they own a machine which was manufactured and registered “certified”,  is serviced and repaired by a licensed AME (aircraft mechanic engineer). For those pilots, the confidence of having their machine looked after by a professional and having that machine conform […] read more